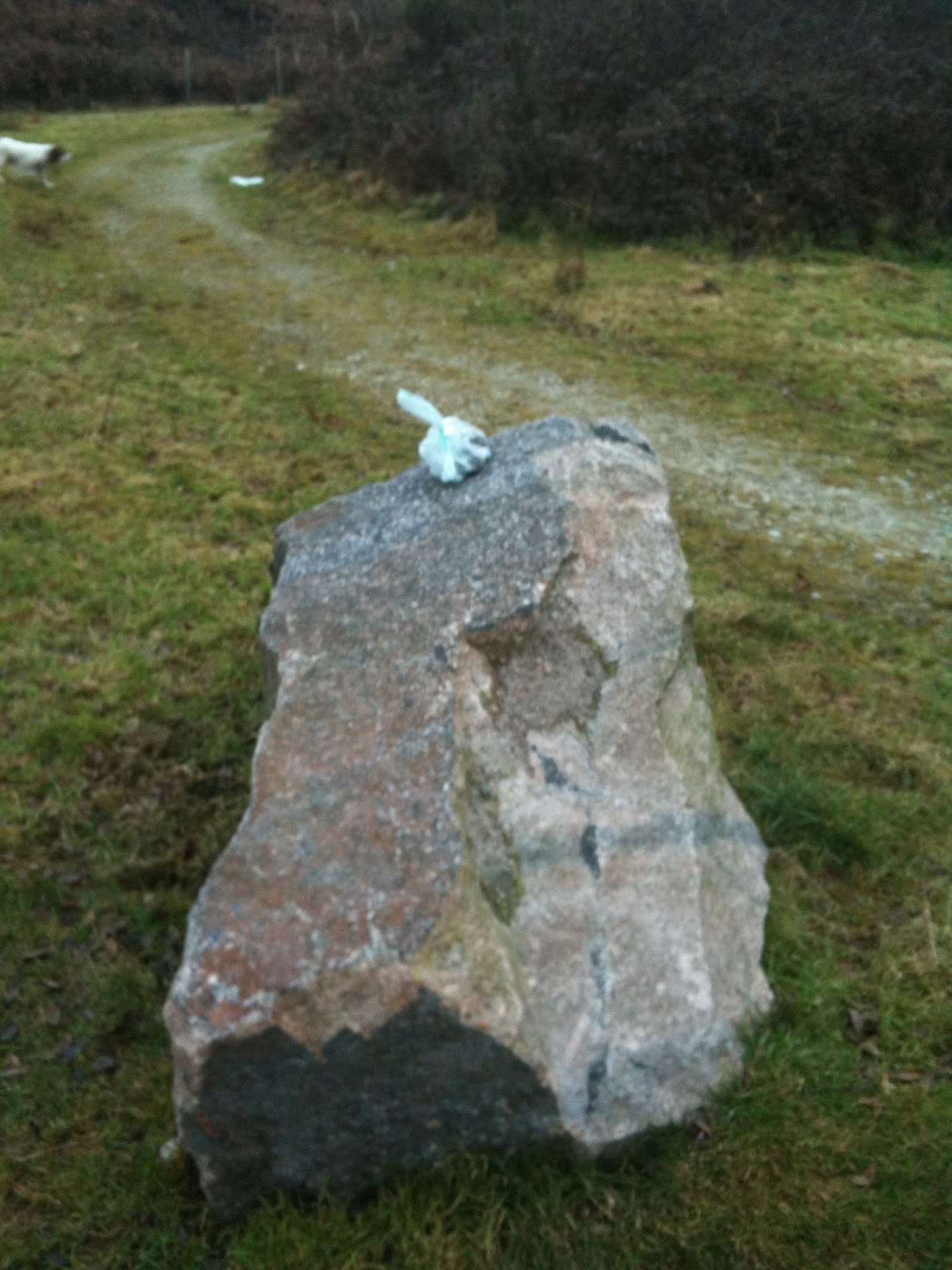 Did you ever see the Billy Connolly sketch where he was talking about his trip to Australia? He was talking about all the vicious things that could kill you and was particularly taken with marine life in particular the Box Jellyfish, a creature that could kill a man a hundred times over. He main concern was the naming of this savage beast, box jellyfish “They gift wrap the feckers!” I have to point out that he didn’t say feckers, he was a wee bit more Anglo Saxon. Anyway, it was the whole concept of gift wrapping a lethal weapon that made me wonder about other inappropriate gift wrap items. Dog poo for example, why do people feel the need to gift wrap it? I despair of the amount of times I see neat little bags littered all around the countryside.

This really got my goat the other day when I got out of the car and within 5 metres of the car park sitting on top of a large granite boulder was a little blue poo bag neatly tied up and sitting in pride of place. Who does this? What is the thinking behind it? Did they think the boulder needed highlighting? They hadn’t left it to collect later as there was no car present and was still there an hour later. If they considered poo to be so completely offensive that it needs wrapping up why the hell don’t they take it home with them? Was it a protest because there was no bin provided? What’s to protest about? It’s your dog and his poo. Clear it up yourself and take it away, don’t expect someone else to do it for you! It’s great when bins are provided and I do like not having to drive home with little piles of gift wrapped poo but I don’t leave them in pride of place to register my annoyance.

I can’t make up my mind if this person’s actions were better or worse than the idiot that gift wraps the poo and then hurls it into the hedgerow to hang forlornly from the branches like such toxic tree decoration. Actually, I can make my mind up, this is worse, it offends the eye but can’t be reached and removed. It adds nothing but plastic to the ecosystem and shows such lack of concern for the landscape and environment that I wonder why these people even have a dog.

So is a plastic bag parked on a stone or hanging from a tree better or worse that a pile of mess that hasn’t been gift wrapped? Hard to say really, at least un-wrapped it can decompose but if you stand in it or the children fall in it it’s an entirely different matter. I walk a lot around here and I can safely say that I always know when I am approaching a car park because the incidence of uncollected poo goes through the roof, or all over the path, pick your own analogy. I have seen owners so lazy that they open their car doors let the dog jump out run around, do his bit and then they call them back to the car. These people should have their dogs removed immediately. How dare they! These public spaces are for everyone to enjoy and it’s hard to enjoy a place covered in poo. No one who is able to drive a car is unable to get out of it and remove the poo from the main path.
So what to do! If you’re going to gift wrap it then take it home or carry it until you find a bin. If you’re not going to pick it up then flick it into the undergrowth as advised by the Forestry Commission, it will rot down, out of sight and not underfoot. Can I just say though, that if you walk your dog on a beach then always, bag it and remove it. No where is out of bounds to children’s bare feet in summer.
…and a Happy New year! Fish and marmalade