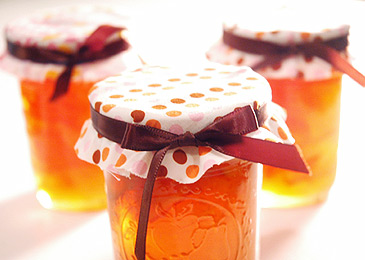 Have you ever made your own marmalade? Tasty, fun and barring explosions very easy. I’ll come back to the explosions in a bit. January is the time to make proper marmalade as it’s the Seville orange season. These warty, ugly sour oranges are only available for a short period so you need to grab them when you see them. Richards by Par docks always has a good supply in and they often have little recipe sheets to go with whatever they have in at the time. Marmalade is one of those wonderful seasonal foods, of course you can make marmalade all year round with lemons and grapefruits and sweet oranges and so on but for a proper strong, rich marmalade you need the sevilles.

The most tedious part is slicing the rind, and because I need a sharp knife to do it, it’s not one of those “fun” tasks I can con the children into doing. Eventually fingers stinging from the acidic juice, the deed is done and then it’s just softening in water and melted sugar and then boiling the whole lot until a set is reached. If you don’t pay careful attention and stir regularly you may cause a skin, which may burst in a rather volcanic manner leaving you and the kitchen covered in boiling hot sticky sugar and orange peel. Providing you avoid doing this you will have loads of gorgeous jars of delicious orange marmalade shining back at you. If you line them up on the window they look like captured suns and always make me think of summer, despite the fact that I am making them in the dead of winter, with the wind and the rain lashing around the doors and windows. Even better is to spread some over a thick slice of white bread heavily coated in butter, a coffee by my side, a book in my hand and a fire in the hearth.

Winter seems an obvious time to think about food, all those lovely heartening stews and soups, big roast, bowls of porridge and whilst I often think of fish as a summer food I’ve been thinking about it a lot following the Hugh Fernley-Wittingstall programme on fish waste. I’ve never seen such criminal waste. One fisherman said “it might not be legally wrong but it is morally wrong” and he was right. I live here by the sea, a huge part of our economy comes from the sea but I was unaware of the senseless waste that our fishermen are being forced to throw away. I know all about tuna issues and farmed salmon but the concept of the quota missed me by completely. I was incensed to see those huge dead fish being thrown back overboard. There was a wonderful Ealing Comedies moment when the fishing fleet threw their “discards” overboard within paddling reach of the shore. Like Whisky Galore the locals made the most of their unusual harvest filleting the lovely free fish and making a feast of it.

The scientists say that the stock levels aren’t high enough and I have to respect their opinions as much as the fishermen’s, as I don’t yet know enough about the subject. But from what I can see, throwing back dead fish is wrong.

Maybe like marmalade we need to start thinking more about the season that the food is naturally available in and the quantities that it’s available and change our lifestyle accordingly?