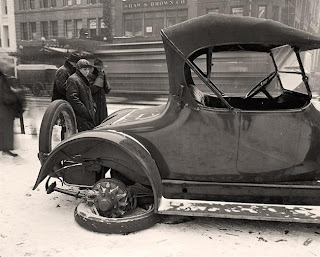 So there I was at the level crossing, gates downs, clay train nowhere in sight so I thought I’d switch the engine off and listen to the radio. Eventually the train arrives and passes the gates are raised and my battery is dead. No phone, no wallet, loads of traffic that I’m holding up even more but thankfully there was a garage right on the other side of the crossing. In fact of all the places I could have broken down at least I was right near help. So I nipped over the line popped in and asked for help. I explained I couldn’t pay straight away but would call later. Less than five minutes later engine running again following a great jump start. Excellent, or it was until I got home and found that that had cost me £58. Standard call out charge apparently.

Now I know I should have asked first, I know that they are trying to run a business, but nearly £60 for a drive of less than 100 yards and 2 minutes labour? I doubt that they made any easier money than me that day. So I’m fed up, I’ll never use them again and if anyone asks me my opinion of local garages I’ll not be adding them to my list of good guys.

Which makes me wonder about good customer service. Maybe I’m being unfair, after all they came out and fixed my car, but if they had told me in advance what the cost had been, I’d have declined, found a phone and called Steve out. In straightened times, a smile goes a long way and costs nothing. Keeping your customers in the loop, giving them options, even if it might mean you lose the sale, will mean you’ll gain their gratitude. Hopefully, they’ll come back to you for something else or maybe they’ll just tell others how good you are.


It’s funny isn’t it? I can’t tell you which garage it was because that wouldn’t be “fair”, I can tell you about good service but not tell you when I feel let down. It’s all part of our sense of fair play. I made a mistake by not asking the price, they gave me a service so to complain would be churlish. And yet… Still I’m glad that it’s this way. I’d rather we all praised people to the hilt and named them but kept quiet about those we were less impressed with. But there’s lots of companies out there, that play exactly by the letter of the law, 90 day warranty means just that if your washing machine dies at 91 days then tough. Or that the excess charge was clearly laid out on page 14 of the small print. I’m sure we’ve all been caught out and left to feel stupid about it but it does rankle.


Incidently, just to make clear I am not talking about the garage at Twydreath Highway by the railway line. They are lovely chaps and I’d recommend them in a heartbeat.

Blowing out the cobwebs. Is anything too grand for Cornwall?