Do we need another supermarket? 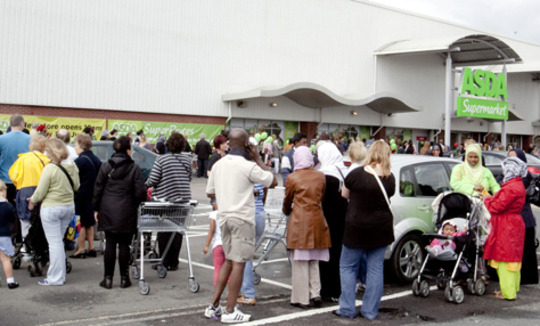 Hands up who likes standing in queues, being barged by trolleys never finding anywhere to park and always trying to find where the sugar has been moved to. I don’t see many hands up.  So maybe we could do with another supermarket?  We are the largest population centre in Cornwall so there are a fair few of us all using the two major supermarkets at any one time. When summer comes round and Cornwall swells up then trying to go shopping is an even worse nightmare, so I certainly think we could do with another supermarket and I have to say I’m pretty glad that it’s Sainsburys; I just find its location a bit odd.  Surely we have enough old industrial land to be able to house a shopping village the size of the one they’re proposing rather than tearing up those lovely fields on the drive out of St Austell?  I’m also not certain why anyone thinks the west of St Austell, where very few people live, is a good idea.  To compound the issue, they are going to build a Waitrose to the east of Truro, again on lovely rolling fields where no one lives.  I’m really not sure how all the people traveling from Threemilestone across Truro or from Par along the bypass to get to these new supermarkets  will help alleviate traffic congestion.  In fact you’d be hard pressed to think of two worse bottle necks in Cornwall.

Clearly the planners are relying on the residents of the hugely under populated Roseland peninsular to plug the gap. Certainly many of the Roseland residents will appreciate having the choice of Waitrose and Sainsburys to go to but I think it’s a bit much to expect them to support two massive hypermarkets.  One can only buy so many pine nuts.
However, without being silly, St Austell does need more shopping opportunities if the council is to be able to raise revenue and they aren’t going to be able to do that off the back of the White River Centre.  Certainly things are beginning to get better but given its strange layout it was never going to be able to attract a department store and a good shopping centre needs a department store.  Although I’m not impressed with the location, I think somewhere around Penwithick or Eden would make more sense, even Par docks would be a good use of space, I do think we need the shopping village.
Like many of us, I shop in Truro, online, Mevagissey and only very occasionally in St Austell but things are improving in the town.  We just need a few more good places to eat, free parking and independent traders to make the place a second viable alternative to an out of centre shopping zone which is almost certainly going to happen no matter who protests.  My first step to improve the town centre?  Relocate the library into one of the shops. Stop thinking of segregated shopping zones and start thinking about bringing things together. Oh and a tourist information centre in the town centre for heaven’s sake. I wish people would stop telling me why it can’t be done and start thinking about why it should be done. Right best stop before I start ranting but you know I’m right. Don’t you?
Lighting up the village A day in the life of Mevagissey.