The best bits of the Olympics. 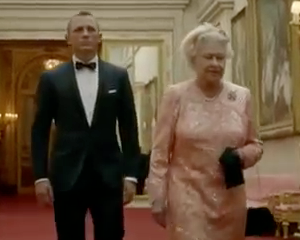 Whilst we wait for the Paralympics I wanted to share my favourite bits of the Olympics so far. It started in Bugle, as I’m sure many things do. I was driving through it about an hour before the flame was due to pass through and it seemed like the whole village was out.  The village silver was proudly displayed on a table, brass bands were assembling in the side streets, bunting and flags festooned the road and every front door was open with people milling about, laughing and smiling.  It was at this moment that I realised that we might be in for something very special.
The momentum of the torch moved towards a parachuting Queen and a stunning opening ceremony with the most wonderful and artistic cauldron at the end.
I loved seeing the cheeky Czech delegates arriving in the Stadium in wellies! Even better was seeing women from countries that had never sent a woman before, even Saudi Arabia, who don’t even let them drive, fielded female athletes. For Team GB our girls have been phenomenal, the first medals went to girls as did the last, the first gold went to a girl and in between they collected many more medals than ever before.
The technology in our stadiums was incredible, did you know the velodrome had been designed to be warmer than normal as warm air is slightly thinner and makes for faster cycling or that the baffles in the athletics  arena were engineered to make it the loudest in the world?
Then there were the events themselves; the dead heat at the end of the female triathlon. Watching the Brownlee brothers coming first and third in their triathlon, the three Jamaican flags rising for the 200m and I really loved the expression on Katherine Copeland’s face as she could not believe she had just won gold! Almost as good as Andy Murray’s.
I was also so impressed with how the athletes celebrated with each other even when it meant they lost gold. In particular during the Men’s High Bar final. Each time all the rivals clapped and hugged each other as stunning performance was followed by even more stunning performance. Those men were able to look at excellence and applaud it rather than show their own disappointment. I was touched by the tears from Pendleton when she saw her Gold changed to Silver but her huge smile and victory lap for the audience and her hug for her competitor were properly Olympian. As was  the Jordanian who finished her face clearly in agony but kept on to cross the line There were times when getting a Bronze seemed even better than a Gold and it was a real laugh to see Tom Daly and his whole team jumping in the pool in celebration.
Even if I didn’t get tickets I could still take part due to the wonderful BBC coverage and I’ll never forget watching the diving on the shop computer with a German family, all rooting for each other’s guy . Then there were the golden letterboxes – well done Royal Mail and finally sharing it all with my friends on Facebook who had been lucky enough to attend. All in all an outstanding affair.
My green fingers have wilted. 50ft Fin Whale stranded at local beach

Why were the Olympics so successful?