One for the birds 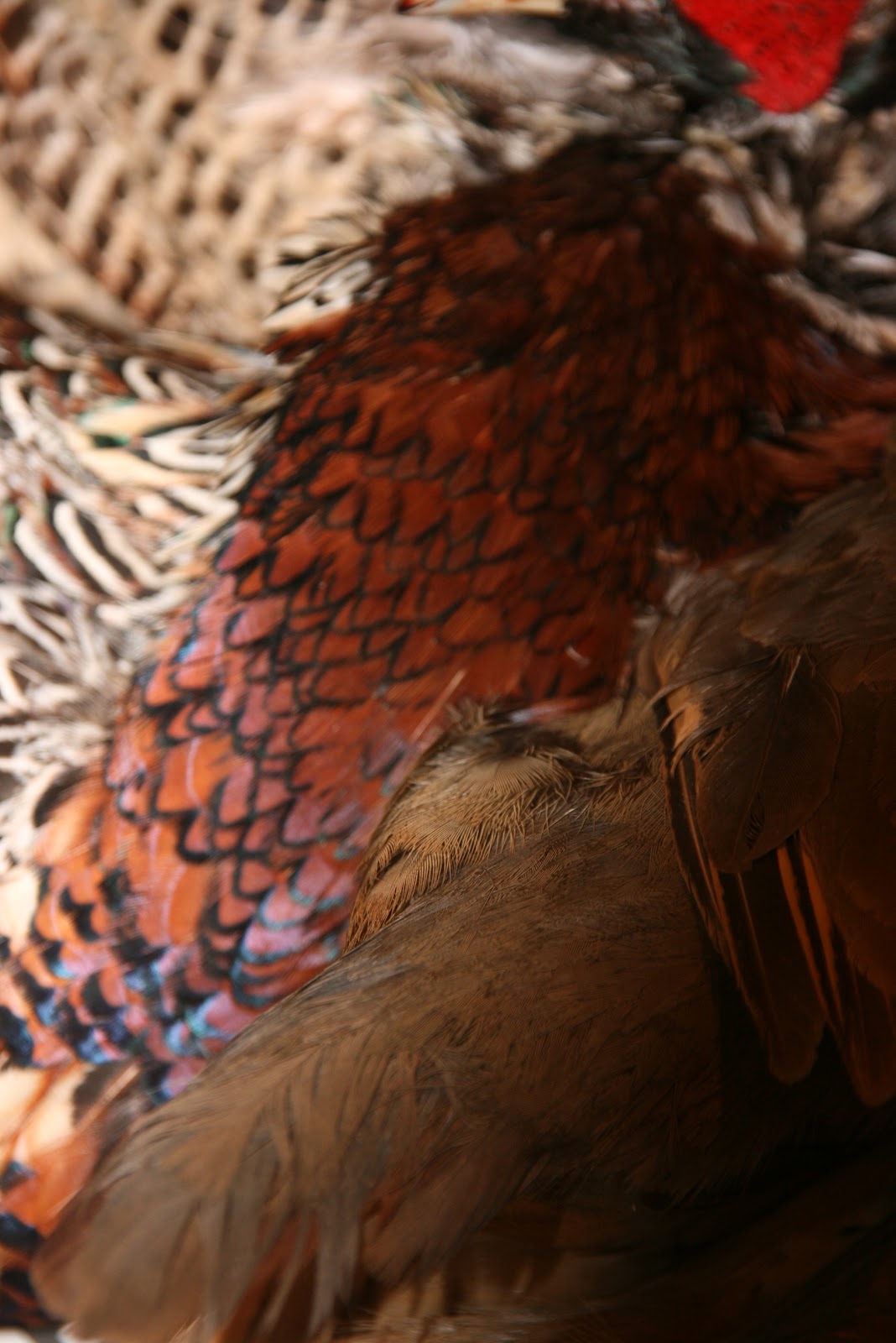 This week seems to have been one for the birds. On Saturday Harry and I went for our regular rugby stroll down to Polridmouth beach and along the cliffs, half way down I began to hear a shooting party coming from the Menabilly estate area. I wasn’t that bothered as Harry is unaffected by loud bangs, fireworks don’t faze him, two screaming boys don’t faze him so why should some distant guns. As we got closer to the beach he hared off into the undergrowth and came back proud as punch carrying a dead pheasant.  Nothing for it now but to head towards the guns and return one of their birds, it was so funny watching Harry trot past the Labs and proudly drop his find at the feet of the shooters.  It’s a strange way to see birds up close when they’ve just been shot but I’m afraid I’m not sentimental about it, I eat them and they taste great.
Which is just as well because on Monday, Dave dropped in a brace of pheasants and partridges to the shop. Oh good I thought as I eyed their splendid plumage, how the hell do I prepare a whole bird. In the end I chickened out and just removed the breasts. I know it was a bit wasteful and I had some great casserole and roast recipes in front of me, but one of the birds still had grain in its gullet and it was all a bit too much. When I was younger I couldn’t enter a butchers because the smell of blood would make me very queasy but like most things you just learn to suck it up. Not the blood, that would just be gross, in fact I’m making myself queasy again so I’ll move on.
Having dealt with the birds I had to dash off to get the boys so I wrapped the 4 birds in newspaper, popped them in a bag and dashed off.  It would be hard to describe the slaughter house scene that greeted me and the boys on my return.  In a rare show of co-operation the cats and Harry had got the bag off the table onto the floor and then opened it up.  Blood, feathers and body parts lay all over the floor, table and chairs, three living animals looked very pleased with themselves and four dead ones looked even deader.  My boys just stood there looking on in shock! Harry tried to look nonchalant but was unable to pull the look off properly as he had feathers sticking out of his ear, the cats just looked at me as if to say “and?”
Moving away from game triumphs and disasters I’ve also had a great week bird spotting. This is a great time for it as there are no leaves on the trees and branches and so the birds can’t hide so easily. Obviously bird spotting isn’t so easy with Harry, I usually just see the backs of birds as they fly away in alarm but sometimes I get lucky.  On Tuesday morning a walker told me to keep an eye out for a kingfisher, the man had seen it every day for the last week at this spot.  I have to say I haven’t seen it once! I have seen lots of others though, chaffinches, goldfinches, curlews, chiffchaffs, pipits, turnstones, stonechats and maybe a cirl bunting – this last one is unlikely as they’re not supposed to be around here but it really didn’t look like a yellow hammer which is the next closest thing it could have been. So there we go, if I haven’t been massacring or inventing them I’ve been spotting or eating them.  Hope you enjoy our feathered friends as much as I do.
Hands up, how many of you became astronauts? and one for the dogs