Liz Hurley is a bloke and can’t windsurf. 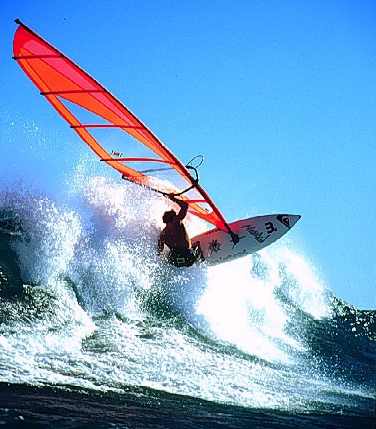 Well for my birthday this year Steve booked me some windsurfing lessons.  I don’t know if he was hoping I’d head straight for France and never be seen again but that would have required me being able to actually leave the bay.  Maybe next week he’ll get his secret wish and maybe by week three I’ll have worked out how to turn around. Mind you I may well choose to stay put.
I went out with Polkerris Watersports, a great crowd that have been teaching my boys to sail for the past few years so I had complete confidence in their teaching abilities and safety measures as well as their friendliness. When you are about to make a complete pratt of yourself it’s good to know you won’t be laughed at and that you won’t drown. In that order.
It became quite clear early on when I was the only one to fall off their board on dry land that I wasn’t a natural. The fact that I fell off a further two times should have given me some clues as to how the next three hours might progress. We were a small class of about seven plus two instructors, Adam in the safety boat and George out on a board with us. We practiced standing up, turning the board around and windsurfing all in the safety of the harbour. I soon realised that as hard as I had thought this might be I had under estimated. At one point I fell off the board, fell into the water and was promptly rewarded with a crack on the side of my head via the mast. George quickly appeared alerted either by the sound of the thwack or the volume of my swearing or more likely because he was keeping a vigilant eye on all us novices. He duly explained that when you fall into the water to keep a hold of your mast as you will “instinctively” never let it come towards you and will push it away. So up I went again and given the amount of times I was falling in I was finding the getting up and balancing pretty easy. It was just when I tried to do something with the sail that it all went horribly wrong. The next time I felt myself falling back I remembered George’s advice and held onto the mast and promptly pulled it down into my head. I won’t pretend it didn’t hurt, it did, but it could have been worse. The fact that I was in water meant that at least my body, floating in water, was able to deflect the blow by sinking down. Now the problem was that I was drowning. I exaggerate but there I was bobbing under the sail, head throbbing and cursing like a banshee. Clambering back on board I checked to see if there was any blood and at this point any sane person would think, well if it hurt that much maybe you should consider returning to the shore. But I’m either not that personality type or I’m a bloke so I persevered. Given that I also won’t stop the car to ask for directions when I’ve temporarily misplaced my location (see, I can’t even say lost) then maybe I am a bloke.
The limit was reached when I found myself constantly becalmed at one end of the bay, Adam assured me that I was just in a tricky wind spot, not actually useless and so I tugged my board to the other end of the bay. I tugged it because I was far too tired at that point to climb on again plus I was also incapable of windsurfing over to the other side. Finally I seemed to have found the wind but also the waves and on one of my many falls my fingers got trapped between the mast and the board. Between the metal pole of the mast, the solid board and my fingers, only one of those was remotely pliable. Now I don’t have great fingernails but they are at least pink, black is not a colour preference. I knew the game was up when I then started to kick my board and shout rude words at it. Whilst floundering in the surf. Once again George to the rescue who told me how one windsurfer had once punched a hole through his sail in frustration. Bruised, battered, exhausted but laughing I left the water and headed towards a hot chocolate along with the rest of the group, who seemed to have managed to get a few lengths in. I’m undaunted though, I’ll be back next week and maybe by week three I’ll be able to stand up, travel in a straight line and then turn around again?!
A30, M5, M4, M25, M11, A11 Goodbye Dear 205