Jubilee nappies – a step too far. 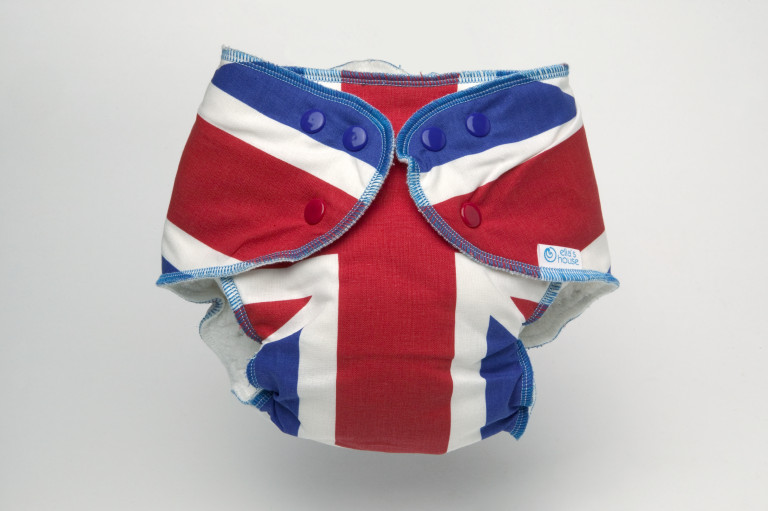 Before I go any further let me just state that I am a royalist. I don’t mean that I would fight to the death to uphold the royal family but in the whole scheme of things I think the concept of a monarchy is a benefit not a hindrance. There may be family members within the Winsors that are a liability or a hindrance but I’m not about to go around judging other people’s families lest mine be judged. I may also seethe a bit from time to time about who has what in terms of yachts and palaces and ski holidays but they aren’t the only family to be loaded and “it’s not fair” isn’t a very grown up response to life. I should imagine that when the two Princes wanted to grieve for their mother in private but had the eyes of the world watching them, that they didn’t feel that was very fair either.
But beyond, the “who has what” and “who does what” and “he’s a bloody liability” is the actual concept of monarchy. It is a historical thread that has run down Britain’s backbone for almost two thousand years.  It has shaped our nation and in turn has shaped the rest of the world. Now it is largely ceremonial but even ceremony is important. Not just for tourism and pomp but for the sense of occasion.  Who would we be without our rituals and our ceremonies? What would Christmas be without the stockings and the Christmas morning walk,  the first day back at school without the back to school treat, the first day on the beach without the freezing cold barbeque? Wimbledon without the strawberries and the rain?  All these little things bring us together and ground us. They remind us of our parents and grandparents, our family, our community and our nation.  There aren’t many things that unite us as a nation but the monarchy is one of those things that we all have in common, love it or loathe it.
That said even I am finding the current Golden Jubilee mania a little wearing.  It’s not the event that is the problem but the commercialisation of it. Again, I have no problem with people making money but yesterday I went to buy a packet of Haribos and the packet was decorated in a Union flag. That most nauseating of American sweet has absolutely no association with the British monarchy and yet there they were, flying the flag. I could have walked around Tesco’s and done my entire shopping purchasing only items with a flag plastered across them.  There was even a box of tissues decorated in the flag and surely that is a step too far.  I don’t want to blow my nose and think of England!
The problem with the flag is that it is not just the Jubilee, maybe if it was we would see less but as we have the Olympics as well the advertisers are just in a feeding frenzy of patriotic memorabilia which is going to lead to a hysterical meltdown. I don’t want to sound grumpy and I think the whole thing is wonderful it’s just that if I see another inappropriate use of the flag I might have my own hysterical meltdown.
Dirt – David Vann Weasel Words