﻿ It had been another windy and rainy night but at 6am a car drove past and suddenly it sounded like there had been an explosion.  I looked out the window and a car was clearly struggling on the road.  This was the first indication that something had happened overnight.  I got up to see what had occured and found a blown out manhole cover, the driver obviously hadn’t seen it in the driving rain and flooded road and had gone straight into the hole. Someone from St Austell Brewery came out and put a cone out and later moved it back over the whole.
﻿ 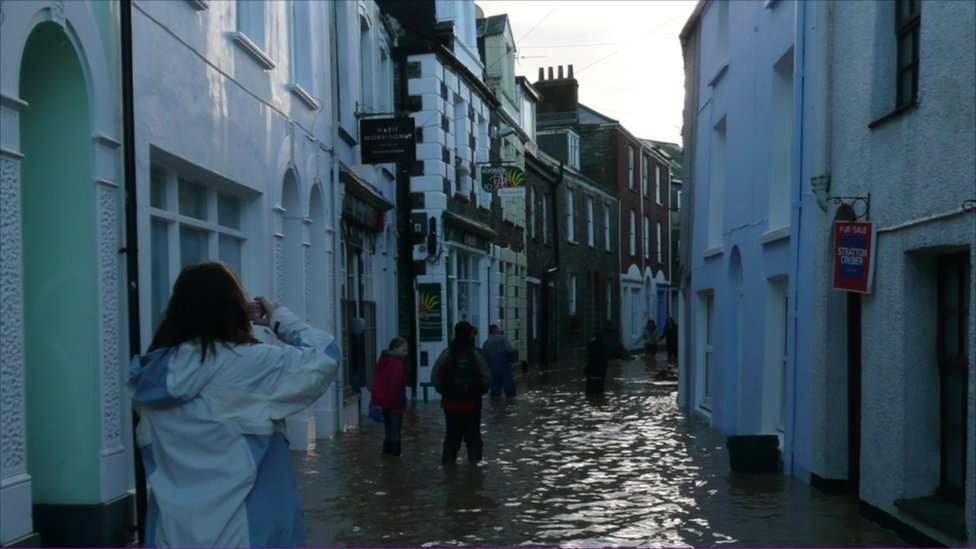 I switched on the radio to see if the rain had affected anyone else to discover reports of landslides, helicopter rescues, front doors blown off, car floating in roads and all happeneing right on my doorstep.  You listen to things like this in horror and fascination as you stand in your dry house wondering how it could be so bad just half a mile away in all directions.

﻿﻿ ﻿﻿
Of course as the reports came in on Radio Cornwall I began to realise that whilst the house was dry the  warehouse was right in the middle of the affected area, at the bottom of a hill, by a river.  Books and water just don’t mix so Steve got in the car to see how close he could get and see if we still had a business.  He had to park on the bypass and walk down to the warehouse and described a road that was a river and flooded areas everywhere but not in our section of the St Austell Bay Business Park. Whilst he was walking in I suddenly realised that Mevagissey where the shop is might also be in trouble.  I called Mum who said all of Mevaggisey around Fore Street was flooded and the storm drain was like a cauldron. Jetty Street is one of the highest in the village despite being right by the water front so the shop was dry.
The children’s school is inaccesible so I have two rather happy children here, one mine, one that I take in. Her father is trying to get his son to Truro as the railway line is closed due to landslides.  Eldest son has gone into school but I imagine that it will be disrupted services there today.
﻿﻿

Steve is now walking back for a fry up and we’re keeping an eye on Mevagissey; the news reports that Mevagissey is completely closed off at the moment and Mum says the water levels are continuing to rise as the flood waters from St Austell flow down.  High tide is at lunch but if it stays dry hopefully the worst of it will have drained away before then.

All we can do is keep in touch by phone and twitter and thank god that no one was hurt.
https://www.youtube.com/user/MatConnolley#p/u
﻿﻿﻿﻿
Incredible videos of Lostwithiel taken by Matt Connolley.  Thank god this happened at night when no one was on the roads.
Boot Camp – the results. E.V.Thompson to sign copies of Beyond the Storm December 4th