Give children the vote! 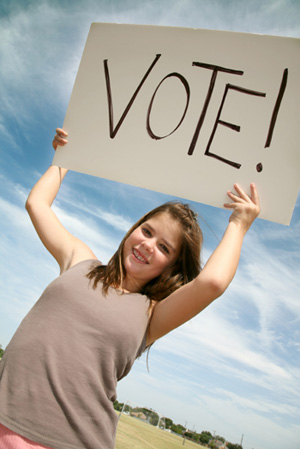 Chilly nights and the new Bond film have set me thinking of Scotland again but even without these prompts, Scotland is very much on my mind at the moment due to the upcoming referendum.  Will Scotland choose to leave the United Kingdom? An issue that is going to cause a lot of talk and speculation but hopefully no change. The issue that I am finding really fascinating about the whole debate though is that the vote is being opened up to 16 and 17 year olds.  This decision I think will have far greater ramifications. Thin end of the wedge, horse has bolted, genii is out of the bottle; however you phrase it, once you say that Scottish 16 years can vote on a national topic then why can’t all 16 year olds vote in national elections? Or any elections?
I was chatting to a father the other day who felt it was a really bad idea as children will just vote the way their parents tell them. Interesting to hear that argument being used again, I think it was last dusted off during the time of the suffragettes, and before that, letting servants vote and so on. Personally, I think if you tell the majority of teenagers to do one thing you can be sure they’ll do the exact opposite.  Besides once they are in the polling booth no one knows how any one has voted.
Certainly many teens will not bother to vote but when we have a national voters turn out, of under 60% I don’t think the adult population has anything to boast about.  A 16 year old can live independently, work full time, have children, get married. They are legally responsible for themselves and can make their own medical decisions and be responsible in a court of law.  They can even join the army with their parents’ consent. And yet they can’t vote. Surely every aspect of their lives is affected by the decisions made by government but they have no say. For example, on the minimum wage tariff, anyone under 18 earns £3.68 an hour; someone over 21 earns £6.19 for the exact same job.  Hardly fair.  Maybe something they might like to vote on?
Of course the government passes laws that affect the rights of children; they don’t get a vote because they are children and because they are still in the care of adults.  Whilst the vast majority of 16 – 17 year olds are still at home with their family, they are now legally on a different footing and if they can be held responsible in law and pay taxes towards the government through their earnings then they have the right to vote.
Personally I think that they’ll shake things up a bit. They’re all wide eyed and enthusiastic, they get worked up about stuff, they fight and argue all the time, they are passionate and they care. If politicians think that they won’t understand the issues then the politicians had better earn their wages and explain the situation properly.  If the current  voters are concerned that a youth vote may unsettle the apple cart then maybe they had better get off their apathetic behinds and vote.  What I’m looking forward to is a pincer movement from the retired voters and the teenage voters and maybe we’ll get a new political party that’s in in for the people rather than themselves?  Giddy stuff this Scottish air!
And he shall purify! And we shall learn to sing Alto This column was hijacked by printers and puppies.