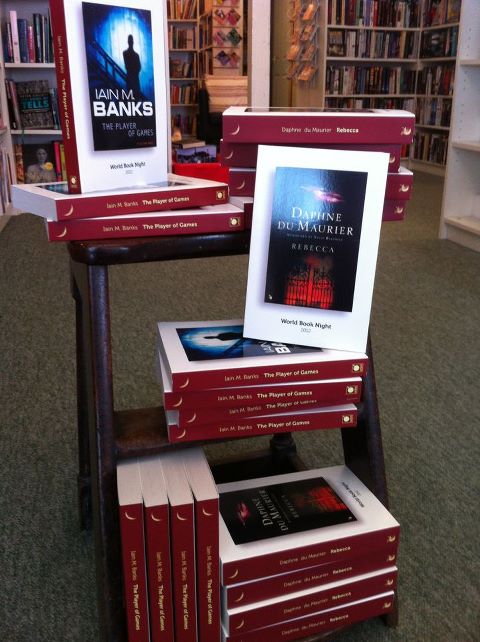 World Book Night celebrates the wonder, the glory, the fun and the fundamental necessity of books and reading. With this in mind the organisers have selected 25 titles ranging from non-fiction to sci-fi to classics and all and everything in between.  People have then been selected up and down the country to hand out 24 copies each. There are over 2 million copies out there so Britain is going to be awash with people who love books passing on free copies to new converts!

I have The Player of Games by Iain M Banks, just a stunning science fiction novel that is clever, interesting, challenging but most importantly accessible. My other title is Rebecca by Daphne du Maurier. Not just a soppy love story. In fact it’s not very romantic at all, it’s dark and cruel, murderers flourish and madness reigns. Great fun.

It’s fair to say that I don’t like going up to strangers but I needn’t have worried, I picked on the Mevagissey fishermen and they were poppets.  Many requests for the Karma Sutra but I had to tell them we only had the Braille version, half of them picked Rebecca which I thought was great, one boy said he was going to give it to his wife for her birthday but we all pointed out the word “Free” copy on the book.  It wouldn’t be the best move. Much joshing about who could and couldn’t read but I hope that they do get a moment out at sea to just stop for a second and read a chapter. If they have The Player of Games they can dream of alien seas, if they have Rebecca, they can look back to shore and see the rhododendrons rolling down to the shore and just picture the scenes in front of them.

If you want to know more and see if there is an event near you visit www.worldbooknight.org