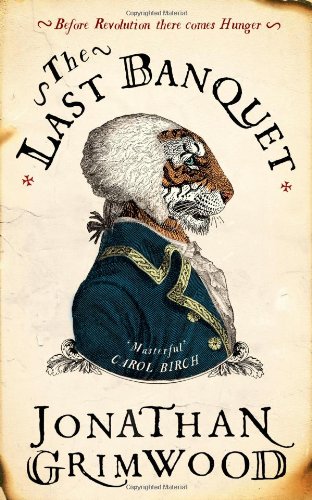 Jonathan Grimwood – The Last Banquet
Set in pre-revolutionary France D’Aumont introduces us to himself at the age of about three, sitting in a garden eating beetles and dying of malnutrition. His parents have died and the local peasants have raided his home of its possessions and food and left him to die. He is rescued by Le Regent who feeds him roquefort and hangs the villagers.  So begins a novel of hunger.  Having been born an aristocrat he is taken in and cared for by an aristocratic system and he quickly makes friends with France’s elite families. Through these eyes you see a country that is gradually devouring itself. The rich are becoming more and more vapid and indulgent; the poor are getting hungrier and resentful.
D’Aumont is described as an orphan, a soldier, a diplomat, a spy, a lover and a chef but it forgets to mention zoo keeper which adds a lovely companionship to the latter half of the story. D’Aumont lives his life through taste before sight, sound or emotion.  At times his efforts to discover new tastes will leave the reader feeling distinctly queasy as he loves to taste humans as much as animals and plants but this is not a tale of cannibalism. Indeed the book is full of recipes but there may not be many you would want to try.
The Last Banquet has been compared to Suskin’s Perfume and the comparison is valid, however as this is not a translated text, the writing seems somehow more vibrant. By the end of the book you can’t help but feel that if France had been peopled by a few more eccentrics like D’Aumont it may have never torn itself apart.
To order your copy through Hurley Books follow this link to our Amazon shop.
https://astore.amazon.co.uk/wwwhurleybook-21/detail/0857868799
White Dog Fell From The Sky – Eleanor Morse Terra – Mitch Benn