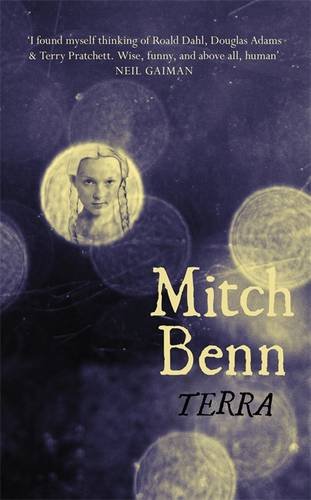 Terra – Mitch Benn
As a baby Terra is kidnapped by an alien who believes her life is at risk and takes her home, to be raised as his own daughter.  Being the only human can be a pretty alien experience but Terra overcomes all obstacles with the help of her friends and new father.  When war breaks out the cultural beliefs of all sides are challenged and as Terra gets caught up in the conflict everyone starts to see a different way of behaving .
Terra is a first novel from Mitch Benn.  Better known as a comedian, Benn has ventured into writing, prompted by his experience of becoming a father. Although  Terra is a sci fi – cross over, comedy novel it is also is a rather lovely tale of a father’s love for his daughter.
The problem with the book is deciding who the audience is. If aimed a children this book is fine, if aimed at adults it seems laboured. I would easily recommend this as a nice story for a child but I just think it would grate as you got older.
https://astore.amazon.co.uk/wwwhurleybook-21/detail/0575132086
The Last Banquet – Jonathan Grimwood Wreaking – James Scudamore