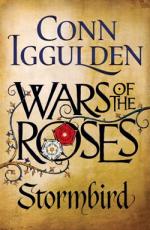 Stormbird – War of the Roses. Conn Iggulden
Despite a recent TV series, the Wars of the Roses has been generally overlooked, the most anyone knows about this period of history is via Shakespeare and his interpretation of a hunchback Richard III and the death of the Princes in the Tower.  Given how violent and exciting this time  actually was, it is amazing that it is constantly overshadowed by the Tudors. So who better to reveal the dynastic murderous feuds than the man who brought the Mongol and Roman empires to life?
Conn Iggulden starts his series with the marriage of Margaret to King Henry IV, his sympathies clearly lie with the young Queen, uprooted and cast into a foreign court  and wed to a man who is clearly very ill both mentally and physically. With no direct heir, factions of the court are determined to try and install a protectorate.  The most powerful of these is led by Richard, Duke of York who himself has a strong claim to the throne, he is supported by his wife Cecily who is painted in the cruellest of shades and makes for a fabulous villain.
Given how many twists and turns there are in this period of history it is hard to see if Iggulden will remain on one side throughout the series but at the moment he is clearly flying the Lancastrian flag. The pace of this book is gripping and never bogged down by historical details. Although generally accurate the author takes artistic license to move the story along when required and obviously adds his own interpretation to the motives and personalities of the principle characters. Sometimes historical fiction can become too bloated by the author’s need to show off all that they have researched. Iggulden just uses that knowledge to underpin his story but not get in the way of it as it tears through at a death or glory rate!
Buy your copy now!
Hurley Books – a change is coming. Val McDermid – Cross and Burn