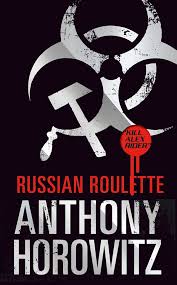 A gripping and clever thriller that reveals how a contract killer is made.  This book is billed as an Alex Rider prequel, certainly it starts off with international assassin Yassen Gregorovich being given orders to kill Alex Rider, and we know from the series that he doesn’t do it but what caused the series villain to stay his hand?  Before undertaking the hit Yassen reads back through his diaries and the book unfolds as his life story, not Alex’s. Starting with his safe and loving life with his parents in a little Russian village he seems an unlikely candidate for a feared ruthless assassin.  Following an anthrax explosion and government cover up, Yassen is orphaned and on the run and falls into the hands of Moscow’s criminal youth. At every step he survives but always keeps to the moral high ground despite extreme circumstances. His skills mark him out and gradually he falls under the tutelage of Scorpia, Alex Rider’s nemesis.
It seems that Yassen’s path was always going to lead him towards being a killer, and yet at every turn he shies away from that option until an incredible encounter with Alex Rider’s father changes everything forever.
This was a fast paced book that required no prior knowledge of any of the Alex rider series. That said my son who has read them all said it gave real insight and depth into the other books and he’s just started to re-read the whole series again. Personally I loved how good the writing was and how moving some of the scenes were.  Anthony Horowitz represents the very best of thrilling writers and on behalf of all teenage boys I’m glad he’s out there scribbling away!