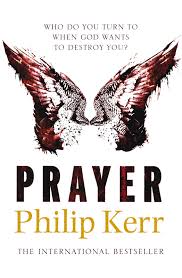 Prayer – Philip Kerr
God may well be real and he’s taking his revenge on the most vocal of atheists. This is Kerr’s first stand-alone novel in almost 10 years and it packs a very powerful punch. FBI agent Gil Martins is an ex Scottish Catholic who now lives in Texas with his evangelical wife. He’s good at his job, bad at his marriage and has lost his faith. The book starts with him following various investigations which seem to peter out as the story progresses but the main strand is that  highly vocal atheists are dying by mis-adventure. The case is brought to him by an old family friend and priest.  People are dying in unusual circumstances apparently in great fear. Intrigued Martins begins to investigate and meets a terrified undercover reporter who is convinced that the people have been killed by prayer. She then throws herself from a 40ft balcony to convince Gil that she wasn’t joking. By following her leads he finds that his dismissal of God may have been presumptive. Even worse his dismissal of God may be his undoing in a very painful manner because this isn’t the “turn the other cheek” God from the New Testament, this is more your wrath and vengeance God from the Old Testament.
This is a fabulous thriller and is likely to be disliked by atheists and believers alike. But if you are a little bit of both and a little bit of neither then you are going to really enjoys this. It does suffer from having an excruciatingly awful sex scene (cringe worthy not violent) but you can skip that and enjoy a really tense page turning novel!
Here’s a sample of the terrible sex scene. Be assured the rest of the book is NOTHING like this. So bizarre 🙂
She uttered a sigh that was also a deep, almost tectonic  shudder, as if she too was suffering from shock; and that was my second cue. I was quickly between her legs, moulding them around my waist and steering myself into the centre of her body with the urgency of one who had almost forgotten what it was like to cleave unto a woman – as the Bible describes it rather wonderfully- and be one flesh with her; until, at the right moment when I felt my hardened prick nudging  right up against the neck of her womb, I let go of everything inside me – not just semen, but all sense of who and what I was – and, I think, she did too.
Buy your copy now
The Windsor Faction – DJ Taylor. Russian Roulette – Anthony Horowitz