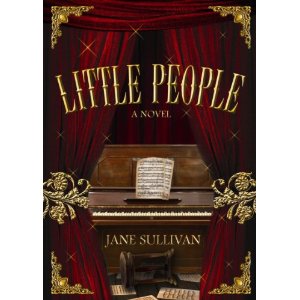 This is a wonderfully gothic tale from Jane Sullivan that will grip readers from the beginning.

The story opens with Mary Ann, a disgraced governess preparing to drown herself when she sees a child in the river. Thoughts of suicide leave her as she goes to rescue the child but instead she discovers that she has rescued Tom Thumb. Set in 1871 the story follows the fortunes of General Thumb’s tour of Australia. Billed as the world’s smallest man, Thumb and 3 other little people toured the world entertaining royalty and politicians as well as giving regular theatre performances.

Hitching her fortunes to the travelling show, Mary Ann gets caught up in the undercurrents that exist between the four entertainers and the show hands. It soon becomes clear that someone means to harm Mary Ann and her unborn child but danger comes from unexpected quarters. Based on true events, Sullivan has created a tale of mystery and darkness. It is ultimately a love story and one of redemption set amongst a backdrop of Victorian fakeries and human jealousies. Liz https://rcm-uk.amazon.co.uk/e/cm?t=wwwhurleybook-21&o=2&p=8&l=as1&asins=1742378854&ref=tf_til&fc1=000000&IS2=1&lt1=_blank&m=amazon&lc1=0000FF&bc1=000000&bg1=FFFFFF&f=ifr